Zinia Lawyer  – Chairman & Managing Director, Bakhtawar Construction Co. Pvt. Ltd., which is a family business and which was founded by her father late Mr. Noshirwan N. Irani in the 1950s.

She holds a B.A. Economics (Hons.) Degree from Bombay University and was educated at Walsingham House School, Bombay and then at Cheltenham Ladies College in England and Elphinstone College, Bombay.

She was the Managing Director of Associated Breweries & Distilleries, makers of the famous London Pilsner & London Diet Beer and also introduced San Miguel Beer in India.  Having specialized knowledge and experience in the field of marketing beer in India over the last 30 years.  Besides Marketing and Sales Promotion, was also co-ordinating all Managerial functions of Production and Finance.

In 2001, the company entered into a Joint Venture with United Breweries Limited and from 15th June 2001, she was appointed as Director – Corporate Affairs.

She was the 1st Lady President of the ‘All India Brewers’ Association since September 1999 for 3 years.

RWITC  :  Stood for elections for the Royal Western India Turf Club and was elected on to the Managing Committee in 2017 & 2018.  Also became a Steward to the Club in 2019 being the first Lady Steward in India and also Chairperson of Marketing & Media Committee of RWITC since the last two years.

Awards & Recognitions :  Was the winner of the IIM-Cinni Fan Bronze Trophy for the “Best Woman Entrepreneur in 1985.  The Shield of Merit from the Special Executive Magistrate Society, Bombay in 1985.

Was awarded the Vijay Ratna for Marketing Excellence presented by Mr. Chandra Shekhar, Prime Minister of India in 1991.   Was also presented  the Appreciation Award by Lion’s Club, Bombay for sincere appreciation and recognition of distinguished services rendered in 1991.

Was given the ‘Achievement Award’ by Rotary Club of Bombay South in recognition of Outstanding Contribution to Indian Industry in 1996-97. 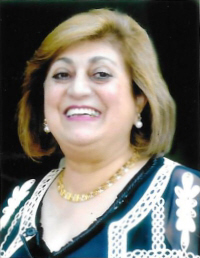