Zarina Screwvala is an Indian entrepreneur and philanthropist. In 1990, Zarina co-founded United Television (UTV). She is an award winning producer of numerous TV shows. From 2004 onwards she led UTV’s entry into the broadcast space where she created and launched several highly successful channels.

In 2011, after UTV was divested to the Walt Disney Company, Zarina moved full time to philanthropy, working to empower rural India through the Swades Foundation which she co-founded with her husband Ronnie Screwvala. She believes that lasting change is possible only is when rural communities are motivated and empowered to take charge of their own lives, and are partnered with corporates, young urban India and government programs.  She tries to bridge the rural-urban divide by “making rural cool”.

The Swades Foundation has a mission to empower 1 million lives every 5-6 years through a unique 360-degree development approach which includes Health, Education, Water & Sanitation and Economic Development.  Today, Swades Foundation has reached out to over 2,700 hamlets across Raigad & Nashik districts of Maharashtra impacting over 748,000 people from 160,000 households, with 270 dedicated fulltime staff and 9000 well trained community volunteers.

Zarina has a deep interest in philosophy, which she peruses as a member of New Acropolis, a school of philosophy in the classical manner. 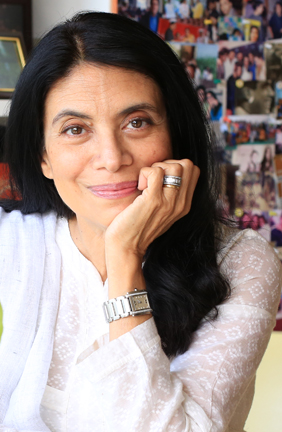