MS. MEHER HEROYCE MOOS joined Air-India in August 1965 as an Air Hostess and retired in  December 2002 as a Senior Executive Officer. She is presently serving as an International Travel Consultant to Thomas Cook.  During her 37 years with the Organization, she had handled various challenging promotional assignments – mostly in the field of Tourism & Adventure Travel – often representing the Corporation at select International gatherings like ASTA and PATA Conventions and particularly the prestigious Festival of India in U.K. and France. She was also deputed on posting from 1986 to 1989 to the Government of India Tourist Office in Milan (Italy) for promotion of India to the South Mediterranean countries.

II. A deep interest in Anthropology and her abiding love for meeting people and seeing places, has found ample fulfillment during her extensive travels to over a 150 countries of the world. Most of her vacations have been spent in touring the unusual and the exotic. Crossing the Arctic Circle in 1972, she visited the 3 Laplands of Scandinavia and in 1976 participated in an exciting expedition right up to the Antarctic Continent on board the famous liner “Lindblad Explorer” sailing from Cape Town to Cape Horn – visiting isolated Antarctic scientific & meteorological bases in an ocean packed with ice shelves & glacial mountains.

III. Other adventurous jaunts took her from the deep jungles of the Amazon to the heart of the Andes – to Macchu-Picchu in Peru, which was the Lost Land of the Inca Kings, onto Lake Titicaca in Bolivia, later covering the length and breadth of South America. She has also back packed exhaustively, all over the seven Central American Republics and visited many Carribean Islands. In 1975, she traversed right across Central Asia following the ancient Silk Route of Marco Polo, through Samarkhand and Bokhara into Siberia, Mongolia and even the vast Gobi desert : and, in 1978 again sailed from Yokohama to Shanghai, touring China extensively. Her travels through the Orient and Far East, continued well beyond familiar cities into the remotest islands of Indonesia, Melanesia and Polynesia scattered all over the South Pacific – crossing the International Dateline in Tonga, right up to the shores of Easter Island with her strange huge stone Gods. Her travels have taken her to all of the Gulf Countries and most of the Middle East as well

IV. In 1981 she embarked on a 5 month solitary exploration of over 35 countries in Africa – bent on discovering forbidden and inaccessible interiors – marching across the Sahara to fabled Timboctou – home of the Tuaregs – then learning to live with the Pygmies in the dense Equatorial forests and finally hitting the Livingstone Trail. This trip was sponsored by the State Bank of India and several leading Industrialists. It was a veritable “ODYSSEY” demanding exceptional endurance and her success story has been amply splashed by the media and television worldwide. She has toured each and every State and Territory within India and made an extensive survey of the seven North Eastern States at the personal invitation of the Chief of Army Staff.

V. Her early schooling was done in St. Joseph’s Convent, Panchgani and later she appeared for her B.A. (Hons.) from Sophia College, Bombay and for her LL.B. from the Government Law College. Her interests range from reading voraciously to indulging in

sports like horse-riding, swimming and table-tennis. She has been a regular speaker on All India Radio and has given several press and TV interviews. Her travel feats have won her many laurels and medals – and as a recognition of “her tremendous courage and exemplary initiative”, the Indian Jaycees selected her for the meritorious award – ‘The most outstanding person of India’, in 1980. In 1990, the International Biographical Centre located in Cambridge, U.K. included her name in the 11th Edition of the “World Who’s Who of Women”. She has also been singled out and nominated for the prestigious title “Woman of the Year – 1992” by the American Biographical Institute located in North Caroline, U.S.A. – and has been featured in the “Limca Book of Records”.

VI. However, her most significant and lasting contribution to Society at large, has been her vivid travelogues in leading journals and her educative and informative audio-visual shows screened all over India and abroad by various institutions and educational establishments. Her enterprising spirit has installed in our youth a sense of pride and purpose – and in our women, a deeper drive for emancipation  – so vital for the growth and development of modern India. 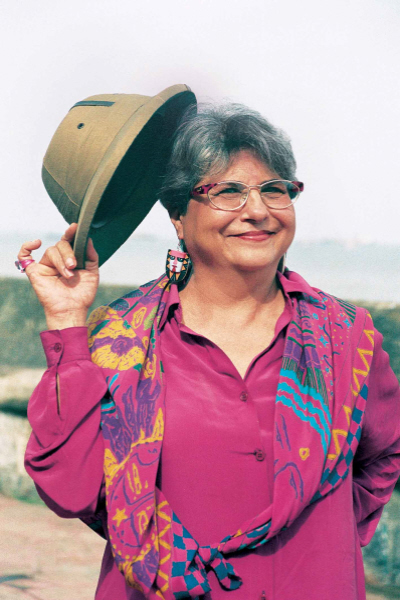