Born in Bombay in 1943 to Aloo and Hoshang Tata.

A keen athlete, she represented her school at many inter-school events, creating a new record in the Putt Shot event in1960. Later represented Xaviers College in inter-collegiate events. Her athletic abilities later translated into her becoming a keen golfer.

Was elected as Lady Golf Captain of the ladies section of the Willingdon Sports Club Mumbai for three years. A keen Cathedralite, she served as the President of the Alumni Association in the late 90s for three years.

In 1964 Meher was selected by the Ministry of Commerce, Government of India, to represent India at the New York World Fair 1964-1965. The two year duration at the fair and in the city of New York turned out to be a wonderful experience.

Meher married Purshottam Amersey in 1974 and has two children, Shalini and Harshavadan.

Keen to get involved in social work Meher started in the early 60s to work with the Time and Talents Club. The Club was founded in 1934 by a group of women who were strongly motivated to use their time and talents constructively for the benefit of the disadvantaged. Meher was elected President from 1977-1999 re-elected from 2007-2009.

Meher is the Founder President of the Association of In-Married Zoroastrians (AIMZ) founded in1990, to preserve and protect the rights and privileges of women of inter-faith marriages.

AIMZ was instrumental in ensuring that women of inter-faith marriages to rightly worship at the fire temples and have their last rites performed at the Tower of Silence after a long battle. 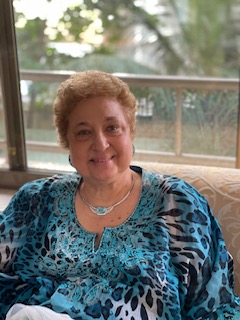