Kermin Parakh, nee Sidhwa grew up in Lahore, Pakistan. Her father Justice Rustom Sohrab Sidhwa was a judge of the Lahore High Court and was later elevated to the post of a Judge of the Supreme Court of Pakistan. He was a great scholar who wrote books on the history of the High Court of Punjab, on philately; a book on Errors and Variety and on the District Grand Lodge. Her mother was a great social worker who helped out locally as well as volunteered at the Zoroastrian Religion classes in Lahore. After her initial education in Lahore, Kermin proceeded to do her master in Urban Development planning from the London University U.K.

Working as an Architect in Nespak she took a transfer to their office to Karachi office after she got married and here her life took a different turn. Putting her architectural career on hold to look after her three young children she started helping out in a friend’s community school as a teacher for the pre-school. The saying that goes Never Say Never holds true here for Kermin as when approached by her colleagues to teach History of Architecture at a local university, she insisted “I can never teach”. However, the ten years she put in the Bohra Community school and well-equipped with a Bachelors in Education, she felt she was well – trained to take over the prestigious 150 years old Zoroastrian community school “Bai Virbaiji Soparivala Parsi High School” an all boys institution in Karachi. She changed the curriculum, hired new staff, introduced the Cambridge Board of Examination, changed the local examination board to the Aga Khan Examination Board, conducts workshops, has read papers at International Symposiums, has been on the board of TRC (Teacher’s Resource Centre), is a member of the Sindh Curriculum Council, has been a panelist on many Teacher Training conferences. She has introduced many co-curricular activities in the school such as clubs, societies, drama festival, concert, elocutions etc. and now BVS is considered one of the top ten schools of Pakistan. She has 27 Years of experience in Education.

In 1994 she followed her mother into social welfare and joined the KZBM (Karachi Zarthosti Banu Mandal) and helped in its Welfare Subcommittee and then in the Education Sub-committee. In 2014 she was elected as the President of KZBM and to date serves the community and follows in the footsteps of all the great ladies who preceded her. 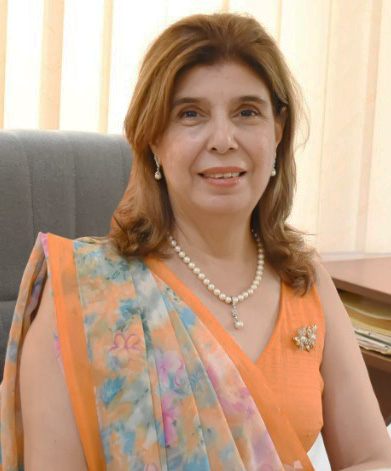