Frene Ginwala studied law at the University of London in the Unlted Klngdom, where she completed her LLB degree. She returned to South Africa to complete her legal training, prior to the banning of the African National Congress.

Ginwala worked in Tanzania, Zambia, Mozambique and the UK as an ANC official and as journalist and broadcaster in East Africa and Europe. She obtained a doctorate in history from Oxford University.

Prior to her return from exile in 1990, Ginwala was head of the Political Research Unit in the Office of ANC President Oliver Tambo, where she conducted research focusing on the transfer of military and nuclear technology. She also served as ANC spokesperson in the UK on sanctions, the nuclear programme and the arms and oil embargo relating to South Africa.

Ginwala helped to set up the Women’s National Coalition, which comprised organisations from across the political spectrum with the aim of drawing a women’s charter. She was elected national convener of the Coalition. She has held various influential positions in the ANC and other non-political organisations. Ginwala has been widely published on issues of democracy, good governance, human rights, human security, anti-apartheid and men’s issues locally and abroad. .

As Speaker of the National Assembly between 1994 until 2004, she was instrumental in arranging many significant changes in Parliament. This included opening up a previously austere, racially exclusive, male-dominated and remote institution to the people at large. She commanded high respect among Members of Parliament and the public in her tenure which spanned the first critical decade of our democracy.

Ginwala served as a member of the Preparatory Committee for the First World Conference of Presiding Officers. She was previously a board member of the International institute for Democracy and Electoral Assistance as well as the former Chairperson of the Southern African Development Community Parliamentary Forum. She is a former member of the United Nations Secretary-General’s Advisory Panel of High-Level Personalities on African Development and recently served as Commissioner of the International Commission on Human Security. 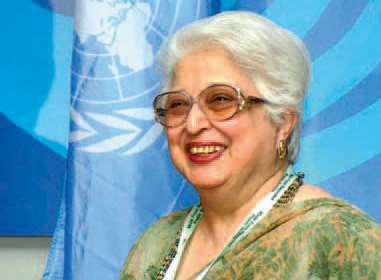