Binaisha M. Surti is deeply associated and passionate about Cricket, as she hails from a cricketing family being the grand- niece of former India Test Cricketer, late Rusi Surti. She has gone onto win several Championship Trophies and medals in athletics and basketball for her school and college, and is also a state level bronze medallist at Kho-Kho.

Hailing from Mumbai, India… Binaisha is a freelance Journalist, Broadcaster, Writer, Reporter, Columnist, Anchor, Author and Cricket Commentator by profession. She has shared her expertise with the nation’s leading media- Parsi Times, Hindustan Times, Mid-day, The Afternoon, CricFit, Red Bull, TV Channel- NDTV. She has interviewed several renowned cricketers, commentators, athletes and Bollywood celebrities.  She also hosts her show on- ‘All India Radio’ titled- ‘Sports Magazine’ and has also worked with ‘DDSports’ Television channel as a Cricket Analyst for IPL 2021. She has gone onto cover prestigious events including the FIFA World Cup, ICC Cricket World Cups, IPL and The Ashes. She has also done a number of promotional shoots for international producers. Along with sports, she covers other genres too.

In 2019, Binaisha was part of the Parsee Gymkhana (PG) Cricket Team that toured England… as their Media Manager/Reporter and further PG made history by winning the 1886 Trophy after 133 years comprising of an all-Parsee unit at the Kia Oval, London. She believes, “Always do what your heart says and chase your dreams. Show gratitude and work hard. Strive to be better than you were the day before, because the expert in any field was once a beginner.” 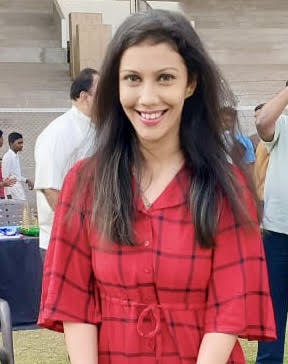