Bella Tata was born in Bombay but spent her early years in Poona and Bangalore.  Her professional career in India spanned many industries and organizations – banking, paper manufacturing, electronic, radio, pharmaceuticals and chemicals.

Bella immigrated to Vancouver, Canada in 1981 with her parents to join her sister and brother-in-law.  She joined the Federal Government in 1983 where she retired in 2011 as Executive Assistance Officer, Pacific Region, Industry Canada.  In 1993, she was awarded a Canada 125 Commemorative Medal for her notable contribution to the department, its clients, and for community work.  In 2002, she was a recipient of the Queen’s Golden Jubilee Commemorative Award.  While with the Federal Government, she was given time off to volunteer for the 2010 Olympic Winter Games held in Vancouver.

Active involvement in community affairs commenced early and she was drawn to do more by a family friend, Jamshed K. Pavri, who was one of the founders of the Zoroastrian Society of British Columbia (ZSBC).  In 1992 Bella chaired the successful 8th North American Zoroastrian Congress in Vancouver, British Columbia.  From 1994 to 1998, she was Congress Chair for the Federation of Zoroastrian Associations of North America (FEZANA).  From 1998 to 2000, she was the first President of ZSBC which was incorporated in 1968.  She also received the Jamshed Pavri Humanitarian Service Award.  To celebrate the 50th Anniversary of the ZSBC in 2018, she chaired a committee to organize the Sedreh Pushi/Navjote ceremonies of a group of youth at the Dar-e Mehr.  Bella’s objective has always been to bring the fruits of education and the message of equality, harmony and unity to all segments of society.

Since retiring, Bella has volunteered her services to St. Paul’s Hospital, Vancouver Symphony Orchestra, West Vancouver Community Centre and was for many years President of the North Vancouver Tennis Society. 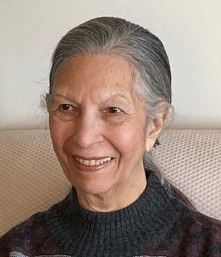