In parallel with her mezzo-soprano classical opera career, Ariana Vafadari composes, records and performs on stage in a very different style. Her CD GATHAS, “Songs my father taught me”, was released in 2016 (Quart de Lune / UVM / Idol). She performed this on great stages in Europe, Africa, Asia : revelation of the Fes Festival of the World Sacred Music; at the Théâtre de la Ville of Paris, Cathedral of Strasbourg, Festival IndoPersan (Marseille), Festival of Namur (Belgium), World Spirit Festival in Nagaur and Jodhpur (India), Bombay Beach Biennale in California, YBCA in San Francisco and at the Burning Man Festival (Nevada).

After studying engineering, Ariana Vafadari graduated from the Academy of Music (CNSM) in Paris, studied at the Hanns Eisler Academy of Music in Berlin, and at the Actor’s Studio. Her concert work in Japan, Brazil, the US and Europe includes the Stabat Mater of Pergolese, Les Nuits d’Eté of Berlioz, the Requiem of Mozart, Schubert, Schumann, Folk Songs of Berio, Britten, Sheherazade of Ravel, Les Chants d’Auvergne of Canteloube or Songs and Dances of Death of Moussorgksy with the soloists of the Philharmonic of Saint Petersbourg, the Pays de Loire Orchestra, and the Auvergne Orchestra.

She sings baroc as well as contemporary music, in recital with Claire Désert, Emmanuel Strosser and others in France, Japan, Germany, Italy.

Her opera roles includes Nancy (Albert Herring of Britten), Nerone (L’Incoronazione di Poppea of Monteverdi), Proserpina (Orfeo of Monteverdi), Dido and Sorceress (Dido and Aeneas of Purcell), Dorabella (Cosi fan tutte of Mozart) at the Toulon Opéra, in Terre et Cendres, of Jérôme Combier for the Lyon Opéra, in La Pellegrina at the Dijon Opéra, Leyla (Leyla et Majnûn of Armand Amar) at Grand Théâtre of Luxembourg and at Salle Pleyel of Paris.

She works for the theater with the French director Julie Bérès, and as an assistant director on the Orfeo of Monterdi, for the Atelier Lyrique of the Paris Opera. She has sung in numerous films. 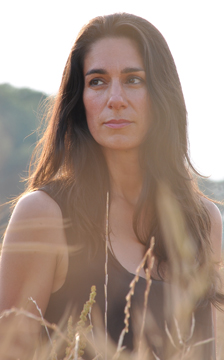