Anahita Sidhwa is an educator specializing in teaching astronomy and physics at the college-level, and holds Master’s degrees in Physics and Education.  While her teaching career began in Karachi, Pakistan, most of it has been at Dallas College Brookhaven campus, where she is Faculty Emeritus.

In 1997 when online education was in its infancy, she pioneered the design of online astronomy courses with hands-on labs. In addition to teaching physics to engineering students and science literacy to non-science majors, she has also been passionate about encouraging teenage girls to explore scientific careers.  Towards that end she has organized conferences called “Reach for the Stars” for which she was named one of 100 Inspiring Women in STEM in 2015 by Insight into Diversity magazine.

Anahita is an active founder-member of the Zoroastrian Association of North Texas (ZANT).  She enjoys reading about women in science, experimenting with new recipes, and exploring the sky.  While researching for a paper on religion and science for the Oxford Round Table she realized that the vernal equinox representing the “golden mean” can be a truly significant day for everyone on Earth.  She hopes to see it celebrated in that manner someday. 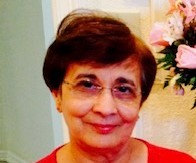